About U-Rent It Sales & Service 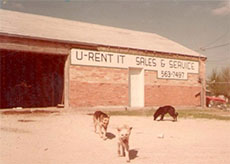 U-Rent It Sales & Service was established in February of 1979 by David & Shirley Landua. The original store location was on Hwy 34 South in Terrell TX. It was a one-person operation, operated solely by David for nearly eight months. As more inventory was acquired a part-time employee was added. Within the next year David’s wife Shirley came into the business. Later their son Mark joined them, and since then they have grown to many employees.

U-Rent It moved to its current address at 2280 W. Moore in 1990. In 1992, the company expanded, opening the Rockwall store. In January 2014, we expanded again with the Mabank location.

We rent anything from a punch cup to a bull dozer, from high reach to digging equipment. Our first equipment rented was a tiller!

From day one our business card read "Rentals for the farm, home, job and play." This covers just about everyone. We have grown from a small inventory to a large one, and now to serve you with 3 locations in Terrell, Rockwall and Mabank TX.